In a year where nothing was normal, winter weather of 2020-2021 has been fairly ordinary with relatively low winterkill risk across much of the Dairyland Seed territory. So far. As the saying goes, March comes in like a lion and goes out like a lamb. Historically, March is a very unpredictable month bringing blizzards, 80 degrees, and everything in between. The warmer weather and longer days lead us (and alfalfa) to believe that spring is here to stay when, in reality, this the most critical time period in the entire year for potential winterkill issues in established alfalfa stands.

Unlike annual crops such as corn and soybeans that need to be planted each year, perennials like alfalfa enter a form of inactivity called “dormancy” once temperatures reach 40o F and lower prompting them to store and conserve energy in their deep root system. To prepare for this long winter’s nap, alfalfa plants begin the physiological process of developing freezing tolerance, or hardening, which removes the water from plant cells so they can’t freeze and, in turn, damage the cell. These low temperatures also initiate a change in the crown and root starches by converting these starches to sugar in order to lower the freezing point which plays a role in creating a stable condition.

Much like hibernating animals, alfalfa plants are able to exist in a state of survival mode where almost all of their resources are preserved for immediate growth once favorable conditions return. An alfalfa crown can briefly tolerate being exposed to temperatures as low as 10o F if the stand has been managed properly in the past and is insulated by several inches of snow. If there is minimal snow cover and temperatures drop below this threshold, especially for an extended period of time, the remaining water in the cells can freeze causing them to rupture and die. If a mid-winter thaw of an existing snow pack or rain occurs, ponding and ice sheets can form which will suffocate the crown and prevent crucial gas exchange from taking place.

During the transition from winter to spring, we often experience temperature fluctuations that cause frost heaving of the soil and alfalfa plants to break dormancy. Frost heaving happens most frequently in clay or heavy soils when the soil contracts and expands in response to the thermometer as it changes. This produces a pushing action on the roots and crowns, lifting them out of the soil, exposing the tissue to temperature extremes and physical injury that both lead to plant death.

Along with an increase in day length, once temperatures reach 50o F for several days in a row, alfalfa plants initiate new bud formation at the crown from their stored energy supply. If temperatures drop below 40o F again, this new growth will die, thus decreasing the productivity and potential of the plant for the growing season. Multiple freeze/thaw cycles that allow for wasted growth increase the likelihood of uneven, injured, or dead plants once spring has sprung for good.

To help make an early determination of current alfalfa stands, ask yourself these five questions:

If you answered “NO” to any of these questions, your field has an increased risk for winter injury and physical examination of the plants is recommended. Work with your trusted Dairyland Seed Regional Agronomist, local ProSeller, or District Sales Manager if you have questions on the status of your alfalfa stands heading into the growing season or want more information on managing alfalfa for a successful 2021. 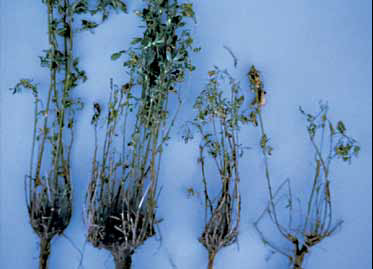 The two plants on the right show severe winter injury.

Look above AND below ground to determine the full extent