Corn rootworm (CRW) larvae and adults cause severe damage to corn every year. Western corn rootworm and Northern corn rootworm are the two species that cause the most economic damage to corn across the Midwest. Corn rootworm adult beetles are starting to appear in corn fields around early July, so now is a great time to get scouting on your radar. It is important to determine if populations are present and, at what severity, to help with management decisions and to predict future problems. 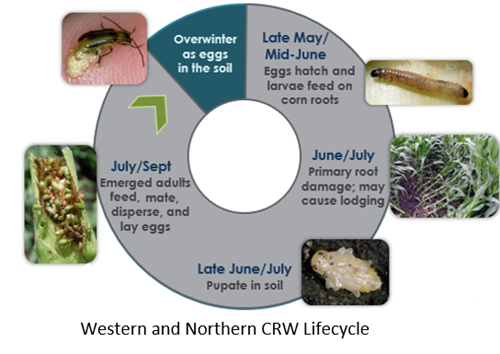 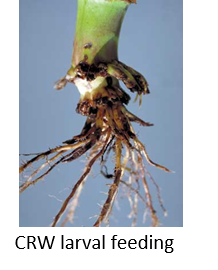 It appears it has been feast, or famine when it comes to moisture patterns for 2021. This is especially true as you move to the east towards Illinois and Indiana some locales have received 5 plus inches of rain in the last few days. Conversely, as you move to the west to Minnesota and into North and South Dakota, areas have received some moisture, but are still very dry in many areas and are in need of more rainfall to get a crop.

With large amounts of precipitation can come crop responses that can be concerning. When soils are saturated, the oxygen levels in the soil decrease and areas of ponding or flooding can be completely depleted of oxygen in one or two days. Oxygen in the soil is crucial for root growth, nutrient uptake and respiration.

Saturated soil conditions are when the roots are flooded and complete submergence is when the entire plant is underwater.

If you have any concerns about your crop that has experienced these events contact your Dairyland Seed DSM or Regional Agronomist.

While much of the Dairyland Seed territory received some desperately-needed rainfall in the past week, there are still areas to watch the rest of the summer to make sure you have the yield and quality needed for 2021 and beyond.

SHOW OFF YOUR FIELDS WITH DAIRYLAND SEED FIELD SIGNS

Signing your fields is a great way to promote Dairyland Seed products in your area. Field signs for corn, soybeans and alfalfa can be ordered by calling the Dairyland Seed headquarters at 800-236-0163 and ask to speak with Stacy Hendricks or Rita Frank.

All growers with orders for any Corteva Agriscience brand seed product, regardless of crop or trait (including non-GMO products) need to have a signed Corteva Technology Use Agreement in place by September 1. Growers should sign the Corteva Technology Use Agreement electronically at www.agcelerate.com. Signing electronically is preferable, however, paper copies are available at www.traitstewardship.com or by calling Rita Frank in the Dairyland Seed West Bend office at 800-236-0163.