With the onset of heat and humidity in parts of the Dairyland Seed region, we are seeing foliar diseases appear in soybeans. The most common being Septoria and Frogeye have been identified in some areas as well.

Septoria brown spot, Septoria Glycines, over winters in crop residue and the plant becomes infected when water splashes the fungus onto the lower leaves of the soybean plant. Symptoms of Septoria are small brown spots and yellowing of leaves in the lower canopy. The brown spots will grow and merge together forming larger brown spots which can cover the entire leaf surface and cause impacted leaves to fall prematurely. Moderate temperatures (60-80 degrees F) and wet conditions favor disease formation while higher temperatures and dry conditions usually stop disease development.

On average, yield impacts from Septoria infection are less than 5 bu/acre. However, if brown spot develops into the middle canopy, the impact can be greater and a foliar application of fungicide would be warranted. 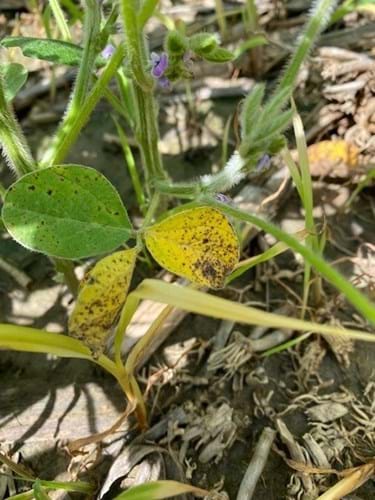 Frogeye Leaf Spot is caused by the fungus Cercospora Sojina which survives in infected crop residue and seed. The spores of this fungus are also readily transported via wind from field to field.  Like many foliar diseases, Frogeye infection is favored in warm, humid and wet conditions and can occur at any time during soybean development.

Frogeye lesions can appear on leaves anywhere in the canopy but are most typically found on newer leaves. The lesions will be small yellow spots at first and then grow to about ¼ inch with grey centers surrounded by reddish-brown margins. Frogeye can progress and infect the stem and pods of soybean plants as well. On the stem, a reddish-brown and sunken lesion will appear and spots on the pods will resemble the lesions on the leaves.

The loss of viable leaf tissue can be detrimental to yield and infected pods can lead to damaged seed. Seed impacted can be dark and shriveled with damaged seed coats. Depending on the extent of the damage, this can lead to decreased grain quality.

Treatment at R3 growth stage with foliar fungicides has shown best results in limiting the impact of Frogeye. There are documented cases of resistance to Group 11 Qol (Quinone Outside Inhinitor) commonly referred to as Strobilurin chemistry. The application of fungicides with multiple modes of action is recommended to avoid resistance and provide the best control. 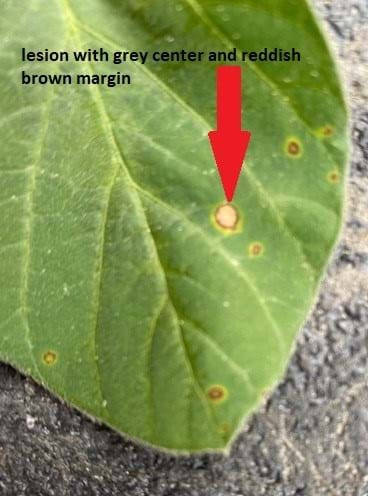 Despite an overall nice looking soybean crop in 2021, the Agronomy Team has been responding to a variety of different “head scratcher” problems that can be traced back to a number of early season conditions. Precipitation of the last few weeks has generally split these cases into two groups: wet and dry. Many of these problems tend to compound onto one another. Below is just a sampling of our observations.

If this list seems too broad, it just speaks to the diversity of issues out there. Hopefully we have given you some ideas towards solving any issues you may be seeing. Please let us know if you need further assistance. 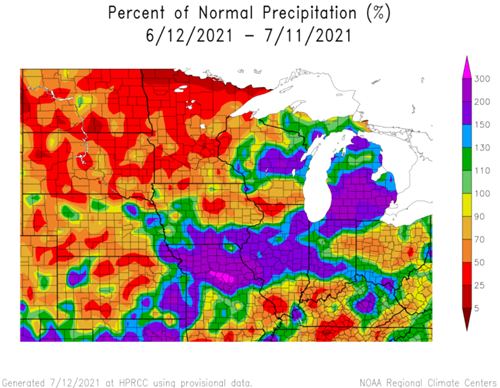 Recent frequent rainfall and storm events across parts of the Midwest may create conditions conducive to fungal disease development, like tar spot. Tar spot is a fairly new disease that was first discovered in the United States in 2015 and caused by the fungus Phyllachora maydis. Severe infestations of tar spot in corn have resulted in reported yield losses of 20-60 bushels per acre.

Favorable environmental conditions for tar spot infestation and development are cool (59-70°F), humid conditions (85% relative humidity) with long periods of leaf wetness (>7 hours). Tar spot appears to overwinter on infected debris and wind-driven or splashing rains move fungal spores onto corn leaves and to new fields. Like other corn disease, tar spot is able to produce several generations of spores and infect the crop multiple times in the same season. The map below shows the current and previous tar spot infections (https://corn.ipmpipe.org/tarspot/). 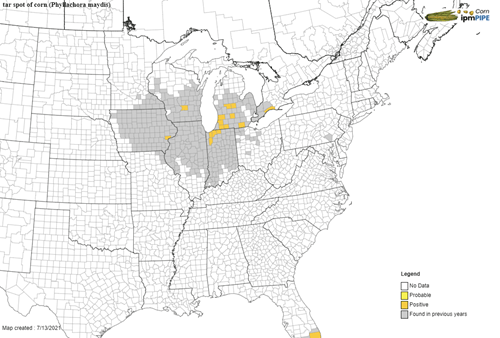 Target fields that are near or at tasseling and fields that have had tar spot in the past. Look at the lower and mid-sections of the corn plant for lesions on the leaves. Tar spot lesions will be black and more or less circular with raised structures called stromata. These lesions may also be found on the upper and lower side of the leaves, stems and husks of affected corn plants. Be careful not to confuse tar spot with insect frass. Frass is often black and about the same size but frass will wipe off with a little moisture and rubbing, while tar spot will not. The pictures below show a corn leaf infected with tar spot.

There are no corn hybrids with known resistance to tar spot but some hybrids are showing slight differences in susceptibility. More studies are needed to better identify the hybrids and tar spot severity level. Practices like crop rotation and tillage, that reduce infested residue and help with decomposition of fungal structures may also help in reducing tar spot infestation. Preliminary studies suggest that fungicide applications may help reduce tar spot but there is not enough information available to make recommendations for effective and economical control. If you suspect tar spot, reach out to your local agronomist or university extension for a positive identification and more information.

SHOW OFF YOUR FIELDS WITH DAIRYLAND SEED FIELD SIGNS

Signing your fields is a great way to promote Dairyland Seed products in your area. Field signs for corn, soybeans and alfalfa can be ordered by calling the Dairyland Seed headquarters at 800-236-0163 and ask to speak with Stacy Hendricks or Rita Frank.

All growers with orders for any Corteva Agriscience brand seed product, regardless of crop or trait (including non-GMO products) need to have a signed Corteva Technology Use Agreement in place by September 1. Growers should sign the Corteva Technology Use Agreement electronically at www.agcelerate.com. Signing electronically is preferable, however, paper copies are available at www.traitstewardship.com or by calling Rita Frank in the Dairyland Seed West Bend office at 800-236-0163.