Dry weather has been the dominant theme for the Agronomy Team at Dairyland Seed, at least since the threat to frost passed. Today’s corn, soybean and alfalfa varieties are as drought proof as ever, but we all know that nothing is “desert-proof”. Here are a couple interesting things that your crop is doing to stay alive in dry times and some outcomes to expect:

Ahh summer is officially here! Why? Because lightning bugs are beginning to add color to our warm evenings. However, as agronomists are prone to do, we tend to find some sort of pest issue, and this is no exception. The arrival of the lightning bugs coincides well with the initial hatching of corn rootworm larvae. This time of year is big for insects as we transition from the seed and seedling feeding insects to those feeding during the more vegetative growth stages.

Insect pressures vary from year to year and by geographic area. Some insects to be monitoring at this time are:

Corn Rootworm Larvae (CRW) –If you are using non-traited or above ground only insect protection and in continuous corn or in a traditionally heavy CRW area, the next week is a good time to begin looking for feeding.  Fully-traited corn fields are of lower priority in scouting. However, it is still a good idea to check those fields as well just as good stewardship management. Digging, transporting, washing and washing roots is standard procedure. In conventional corn, tolerable levels tend to be 8 rootworm or less when washing roots.  As the season progresses, high populations of adults can be a cause of significant silk feeding. 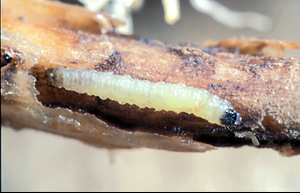 Western Bean Cutworm Moths (WBCW) – If you are in an area where WBCW is a concern, moth trapping should begin this week. Moth trapping helps predict when larvae will hatch and assists in proper timing of insecticide applications. Peak moth flight is usually in early July.  In late July to August larvae will hatch and begin feeding on newly formed ears. WBCW can be especially damaging because several larvae can feed on one ear. This feeding also encourages or facilitates mold to develop in the damaged region of the ear. 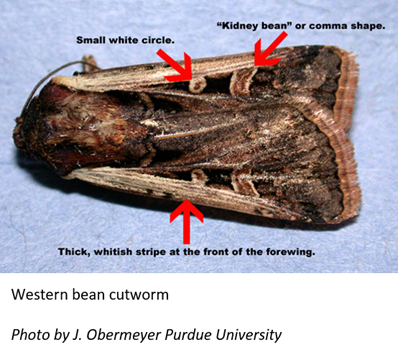 Nematodes: Though not truly an insect, it can be a concern as well. We are seeing an increase in nematode damage especially in corn the last few years. They seem to prefer sandier soils and symptomology may express itself through stunted yellow corn. Root examination may show nubbed or “bottlebrush” root hairs as well. Soil samples can be taken to determine infestation levels and specific identification.

The predominate nematode in soybean is Soybean Cyst Nematode. Stunted, unhealthy plants can be an indicator. But it is also nicknamed the “silent robber” due to the rather quiet way it steals yield away from growers. Root examinations for SCN will reveal tiny lemon shaped cysts. A magnifying glass may help with this diagnosis. Soil samples are also another good way to diagnose infestation level. 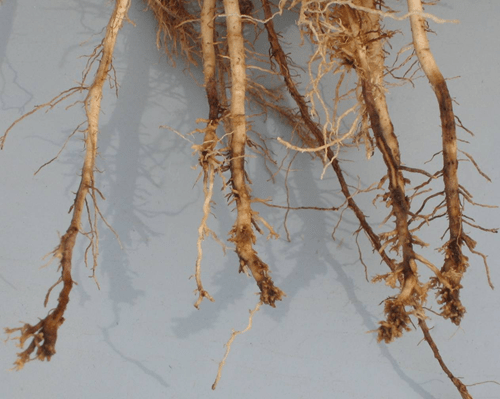 Myriad of Munchers: There are several other insects perhaps of lesser concern until they are in your field. Many tend to be on smaller corn, but include Brown Stinkbug, Common Stalk Borer and True Armyworm. For further information on these and other pests, contact your Dairyland Seed District Sales Manager or Regional Agronomy team member.

Volunteer corn in a soybean field can not only be unsightly, it can have drastic negative yield impact. A volunteer corn stand density of 3500-5000 plants per acre (or one plant per 5 to 3.5 foot per row) or clumps of 7-15 volunteer corn plants can reduce soybean yields 10%-30% per effected acre. In 60 bushel/acre soybeans, this could be up to an 18 bushel/acre yield loss.

Herbicides containing Clethodim are the most effective at controlling both conventional and traited volunteer corn in soybeans.  Rates of these products vary based on the height of corn being controlled. One example of this change in application rate is of Clethodim 2E, corn height <12in 4oz/acre, 12-18in 5oz/acre, and 18-24in 6oz/acre. There are many Clethodim products available, Volunteer, Select Max, Section Three, just to name a few. The impact of Clethodim containing herbicides may not be apparent right away.  The volunteer corn may be yellowed but not appear to be completely controlled. Control can be confirmed 4 to 5 days after application by pulling the whorl from the corn plant. The whorl should be easily removed and, if the base of the whorl is water-soaked and brown, then the corn has been controlled.

If you have any questions on specific products and rates contact your chemical supplier or Dairyland Seed Regional Agronomist.

Visit any of these other fantastic resources for more information: