FROST IMPACT ON CORN AND SOYBEANS

On Friday, May 28, and Saturday, May 29, a frost event occurred that seemed to affect northern sections of the Dairyland Seed marketing footprint. Typically, we like to wait three to perhaps five days before making an assessment. Our observations with this event(s) was it may have taken perhaps up to a week to get a good feel for plant response. This strategy was a challenge as we were up against a pretty hard replant wall.  As always, it’s a balancing act. In some cases, we replanted and in others we held with what we had. The Dairyland Seed team employed some of the following principles during their evaluations of affected fields.

Waiting prior to evaluating the extent of the damage typically will allow a more accurate forecast of plants that will succumb and which will recover. If you find yourself walking fields, pick out a few sentinel plants and place stakes or flags by them. Photograph the progress of these plants day to day. This information can provide tangible proof as to how plants are progressing or regressing, which will help with the decision-making process.

In most, but not all instances, final stands and yield of corn are not affected by frost in the 4-leaf growth stage (V4 or collar on fourth leaf) or earlier. 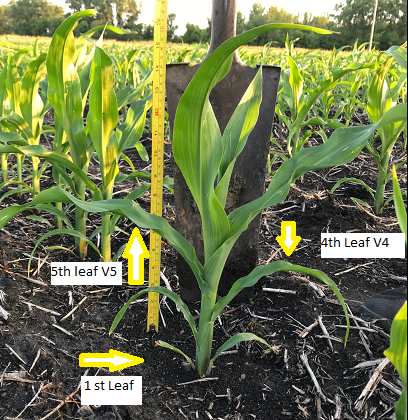 At the 4-leaf growth stage the growing point is between .5” and 1” from the soil surface and above ground tissue can be frosted, turn gray, wilt, and start to dry and shrivel up, but the plant should be fine. With warmer temperatures, adequate moisture and sunshine, normal growth should occur, and a new leaf should start to poke through. If by chance we are cool and wet after a frost event, the above ground leaf tissue instead of drying up may begin to decay or mold. This decay can move down the plant, attack the growing point and eventually killing the plant. Excess leaf tissue that is tied up can in some instances cause similar results.

If the freezing temperatures persist for more than a few hours, the growing point even though it is below the soil line, may be affected. Lighter or finer textured soils such as sand or peat especially if they are dry, may allow cooler temperatures to penetrate deeper into the soil profile, which may increase the loss of plants.

Once the cotyledon or seed leaves emerge from the soil surface the growing point of the soybean is above ground. As a rule, soybeans, can withstand cooler temperatures than corn without significant damage. This is in part due to the leaf tissue of the plant being closer to the soil line and heat from the soil as well as the structure of the leaves and number of leaves per foot of row keeping the heat closer to the plant. Much like corn, lighter or finer texted soils such as sand or peat, especially if they are dry, may allow the cooler temperatures to penetrate deeper allowing more area of the soil to cool, thus killing the plant. 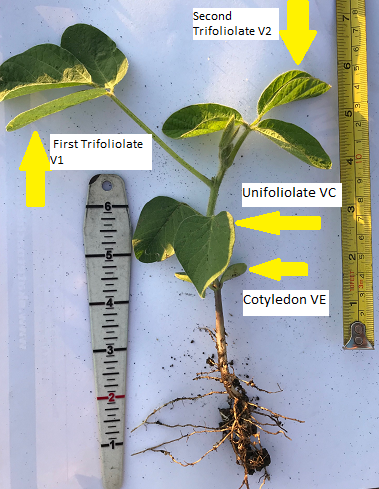 To assess frost damage to soybeans, after waiting a few days, examine the leaf tissue and pay close attention to where the axillary buds attach. If you have green growth coming from those axillary buds, the plant should be okay -- especially if you still have some green left in the cotyledon leaves. If the surface is dark green to black in color where the axillary buds attach, the plant is probably dead. Also, if cotyledons are entirely brown, or the area below the cotyledon (which is called the hypocotyl) is tan or brown and is starting to shrivel up, odds are the plant is dead.

As was stated previously, patience when possible after a frost event and close inspection of plants will give you a better idea of what will survive and what will not.

If you have further questions, contact your local Dairyland Seed District Sales Manager or Regional Agronomist.

Trying to get nutrients into the corn plant at the right levels at the right time for the plant to access and provide a good or increasing yield is an age old challenge. Many farm operations have added sidedressing or topdressing to help with this nutrient management challenge. Nutrient management is not easy in “normal” years. When you add in wildly fluctuating soil and air temperatures, drought conditions or very saturated soils, it makes it that much harder.

Mobile nutrients such as Nitrogen(N) and Sulfur(S) can move through the soil profile (or up into the atmosphere) especially if we have warm soils and heavy rainfall, making it more challenging to manage these nutrient levels. This spring and early summer in most, but not all areas, we have been on the drier side resulting in higher nitrogen levels. Reports coming in from Minnesota, which has been drier this year, confirm Nitrogen Nitrate levels are coming in slightly higher this year compared to other years when there have been heavier or more frequent rainfall patterns.

In theory, sulfur levels would follow nitrogen trends and would be higher in areas with lower rainfall. Conversely, as we have seen in years past, Nitrate and Sulfur numbers should be trending lower in areas that had heavy rainfall in spring and early summer. If your nutrient plan calls for applying additional N via Sidedress, Topdress or Irrigation, include Sulfur with your N, thus increasing your N efficiency and, in most instances, your yield. This may help with drydown in the fall as well as potentially increasing test weight.

Many active discussions have taken place on what is the correct rate of N to have for your corn. My reply is “it depends”. Factors such as soil Cation Exchange Capacity (CEC), Organic Matter (OM), soil type, soil temperature, historical manure applications as well as Potassium (K) levels, have a profound impact on how much nitrogen is available and what the plant can use. The rule of thumb that I have used is:

The importance of in-season N applications is increased due to plant breeding efforts and trait insertions allowing the plant to utilize nitrogen later in the plant’s life cycle. The result is increased yield potential as well as decreased N per bushel used.

If you have low soil test values for Phosphorus (P) Zinc (Z) or K, there have been many instances where in-season applications of these products to an actively growing crop have resulted in yield increases resulting in a positive Return on Investment (ROI).

*If you are applying additional Nitrogen on lighter soil types, the addition of a nitrogen stabilizer such as N-Serve for anhydrous ammonia and Instinct products for urea and UAN products for below ground N applications will help keep your nitrogen in the rooting zone.

Lastly, if you have questions about this or other agronomic topics, please feel free to contact one of your Dairyland Seed Agronomists.

CORN GROWTH AT THE V5 STAGE

In spite of our recent cold snap over the Memorial Day weekend that produced areas of frost, and our recent heat wave that had air temperatures 10-20°F over our normal averages, we have corn that is, or shortly will be, in the V5 (collar on fifth leaf) growth stage.

The importance of the V5 growth stage in corn is that:

To use a parental analogy, your corn plant has entered its teenage years.

At the V5-V6 stage, the growing point is about 1-1½ inches above the soil surface. Plants that break off at or near the soil surface due to hail, sandblasting, mechanical damage (cultivator blight) or other means, will die.

The nodal root system is now the major root system of the plant, with roots being 8-12 inches across and 10-12 inches deep. If your corn plants were a lighter shade of green (some refer to this as the “Ghostbusters” yellow green slime color) prior to V5-V6, with proper available nutrients, they should start to green up once the root system finds the nutrients in the soil it is growing into. If topdressing or sidedressing Nitrogen or other nutrients is part of your nutrient management plan, now is a critical time to get it done. Root growth from now until Tassel emergence (R1) will be dramatic, as will the above ground growth, with plants potentially doubling in height in the next 10-14 days.

Another important consideration that comes into play at the V5-V6 growth stage is many Crop Protection Product (CPP) labels become more restrictive, either by growth stage or height restriction. As a general rule, I tend to follow the growth stage restriction when limiting CPP applications.  This is due to the fact that I can also correlate growth stages by the amount of Growing Degree Units (GDU’s) that we have received since our planting date. 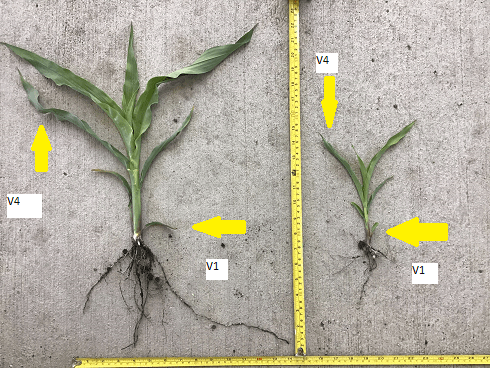 If you have questions about this, or other Agronomy topics, please contact your local Dairyland Seed Regional Agronomist.

As we wrap up planting and, in some cases, replanting soybeans there are several early season, yield and income robbing diseases that often appear in our area. The most common of these diseases are Phytophthora, Pythium, and Rhizoctonia, properly identifying these diseases now can help us manage them in the future.

Phytophthora is a soilborne disease that can impact soybeans at any growth stage, but early season infection is common once soil temperatures reach 60 degrees F and soils become saturated. Phytophthora infected seedlings will have brown/black and shriveled hypocotyls (necks) and discolored cotyledons but roots will often be intact. As the soybean plants mature into VC and through vegetative growth brown lesions can be found on the stem at the soil line and extend from the tap root. When the area effected by the lesion is split, cortex and pith of the root and stem will be brown and often water soaked. 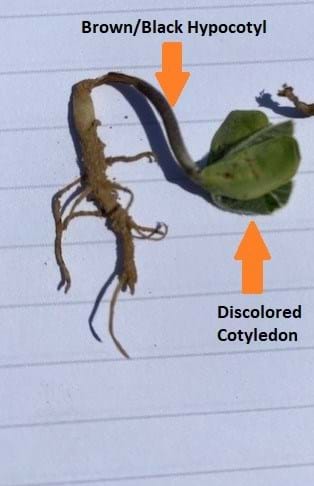 Pythium, also a soilborne disease, often appears in the north when planting conditions are cool, soil temps between 50 and 60 degrees F, and soils are wet. We often refer to Pythium as “dampening off”.  Seedlings will often emerge and the hypocotyl and cotyledons will be brown and soft, the young plant can be pulled from the soil easily due to a rotten root system. Dampening off will most often occur in a similar environment to Phytophthora, saturated soils in low areas or areas where crusting seals in the soybean in a saturated environment. 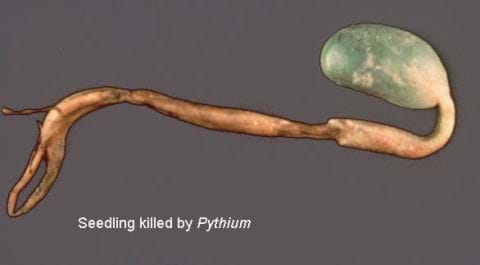 Rhizoctonia is a very common early season, soilborne disease in the Dairyland Seed footprint. Impacted plants will occur in singles or small groups in a field, most often on light or sandy slopes. The identifying characteristic of Rhizoctonia is a sunken, reddish brown lesion on the soybean seedling hypocotyl and in more mature soybean plants the lesion can be found on the stem at the soil line. The lesion of Rhizoctonia will remain in the epidermis or outer layer of the stem tissue, when the plant is split the tissue inside the plant will be white and healthy.

Environmental factors that are out of our control impact early soybean disease infection but we do have tools to help give us the best chance possible. Seed treatments and proper variety selection and placement are our best defense against these early season issues.  If you have further questions, contact your local Dairyland Seed District Sales Manager or Regional Agronomist.