WHAT WEIGHS MORE….A POUND OF FEATHERS OR A POUND OF BRICKS?

That is my explanation when asked about test weight.  As the agronomy team discussed this week’s newsletter, we agreed that everyone has their own opinion on test weight.

We drive trucks across scales and we don’t dump them into precise volumetrically measured boxes.  We convert pounds to bushels. The weight we haul off the field is what really matters most. That said, in most cases we desire a denser kernel if possible.  Typically, denser kernels endure grain handling better and thus avoid the “fines” we may get in bins. (We have included a great article discussing that as well this week.) A denser kernel also stores in a smaller area – let’s refer back to the article title. A pound of brick will fit easily into a shoebox while a pound of feathers may not.

What determines test weight?  Kernel size and kernel density determine test weight. When I think about test weight, I envision popcorn smaller kernels and more orange or very dark yellow color. Big fluffy light yellow kernels typically don’t have a lot of kernel density.  So the challenge while looking at corn preharvest sometimes can be estimating just how heavy each kernel is and how many it will take to make a pound. This is the reason we use the conversion of 90, 100 or 110 sometimes in our yield calculations.  So test weight is an important component of corn characteristics when related to grain handling and storage.  The more important trait is pounds across the scale at #2 yellow dent grades.

When corn is able to mature naturally and reach R6 (Physiological Maturity) or as most everyone calls it “Black Layer”, the handling characteristics of the grain tend to be very good, with not many issues with fines, bridging in bins or uneven drying. (The corn kernel in the photo below shows “Black Layer” at the tip of the kernel.) 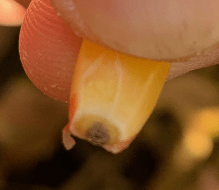 When corn does not reach R6 naturally, either by early frost or a growing season, with too few Growing Degree Units (GDU’s), kernels will have lighter Test Weight. These lighter Test Weight kernels tend to be more difficult to dry due to uneven moisture levels within each kernel as well as kernels being more prone to breakage or creating fines. Every time that kernel hits something hard, like an auger, it increases the potential for breakage.  When filling a grain bin with this grain, the fines or broken kernels tend to fall more to the center of the bin, which can create more hotspots and eventually spoilage. This is one of the many reasons why many producers and grain managers will core or take the centers out of bins to reduce the potential for spoilage.

Another aspect of corn that does not dry completely, is that this corn is more apt to bridge or create a wall of grain that does not flow which makes it more dangerous. A wall or bridge of grain can break at any time, causing anyone near it to become engulfed in grain and potentially suffocating.

The take home statement is that when dealing with low Test Weight corn or corn that dries unevenly is take more time in managing that grain, core your bin centers and monitor it more frequently to reduced spoilage or bridging concerns.

In such a tough year, maybe alfalfa winterkill issues don’t make your list of top ten struggles for 2019. But for many, it does!

The decision to keep or replace an alfalfa stand is a difficult one that is a little different for each grower. We don’t know what Mother Nature has in store for us this coming winter, but taking the time to get out into your alfalfa fields this fall is one way to make spring assessments easier.

Take advantage of rainy or wet days to collect stem and/or plant counts in each field. Drawing a simple map of the field and noting counts in different areas is next level scouting. Prioritize the older fields which tend to be more susceptible to winterkill, but try to hit as many as possible. When you look at your fields in March 2020, you’ll be glad that you spent a little time observing your crop in the fall.

To say that 2019 has been an unusual year, could be justly considered an understatement. With harvest season here, take the time to think and do things safely.

As important as this crop is, we do not need an accident or something worse to make this year anymore eventful.