Active Weather and Its Effects on Corn

To say that we have had an active weather pattern in 2020, would be considered in most situations an accurate statement. This active to very active weather pattern has produced several storms with sustained high winds, tornadoes and straight-line winds that have had a negative effect on many corn fields. (Straight-line winds are winds that come out of a thunderstorm. If these winds meet or exceed 58 MPH, the storm is then classified as severe).

Some of these negative effects are blown down, leaning or lodged corn which, depending upon the stage of the plant, will try to right itself. The lodged or leaning corn plants, in some instances, may also have had to deal with compaction and side wall compaction that may have restricted the root system of the corn plant, thus creating a more susceptible plant to high winds. 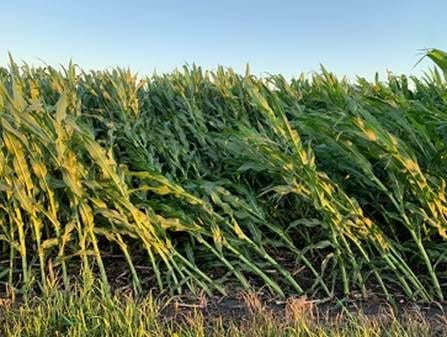 When a corn plant is trying to right itself, it may have a crook or “Gooseneck” in it. This Gooseneck is, in most cases, due to the corn roots being blown in one direction and the corn stalk growing back towards the sun. The crook looks like a goose’s neck; hence the phrase Gooseneck.

Thinking forward to harvest and depending upon the severity and amount of effected plants or fields you have, scouting these fields now to prepare for your harvest season and scheduling harvest orders is suggested. If you are scouting fields now, it also allows you the opportunity to see if your nutrient management program is working, nutrient deficiencies if any, as well as you level of weed control.

On a personal note it seemed that when I was first starting in my career, I was chosen for this task more often than not, especially on warm high humidity days, with high mosquito counts and typically, for fields that were good to great candidates for drainage work. I was told “this is a great character-building activity and will further your Agronomic education” which may or may not explain a few things. If you have questions about this or other Agronomic topic, contact your Dairyland Seed Agronomist.

Corn rootworm (CRW) larvae should be at, or just past, their peak feeding frenzy for the season, making it an ideal time to dust off the shovel and investigate any potential issues. Many universities and state agencies track CRW populations over time and most show that Midwest numbers are the lowest in 10 to 15 years, likely due to the widespread implementation of Bt traits. However, hotspots do occur with damaging consequences, so we need to monitor field conditions closely to properly manage the pest in the moment and in the future.

Right Now: First, if you are just entering pollination, watch for silk feeding. If beetles are clipping silks back to less than a half inch and much of pollinating still remains, consider a treatment.

Next, we need to inspect roots for signs of larval feeding, ideally from mid-July to mid-August. Pruned brace roots will appear ragged and off color while healthy roots are white. The NIS rating system developed at Iowa State University is often used to assess CRW pressure and Bt trait use and effectiveness. You might see a score that looks like 1.75. This means that 1 node was completely pruned while the next was 75 percent pruned. A root is considered pruned if it has been consumed to a length less than 1.5”. A NIS score of greater than 0.75 typically leads to economic yield loss.

For the Future: Root assessments are mostly post-mortem at this point, but will be important for future planning when combined with knowledge of beetle presence during August. Conveniently, we want to watch for more than 0.75 beetles per corn plant in August. Areas that experience “rotation resistant” populations will need to get sticky traps into their soybean fields too.

Tar spot is that new disease that showed up in corn in the upper Midwest about five years ago. Many of you reading this are familiar with it because you’ve seen it on your farm. Many of you have never seen it – be grateful. It has been most prevalent around Lake Michigan, but not limited to lakeshore areas. As we try to learn more about the disease, what can we expect in 2020?

We have had slightly higher than normal temperatures in June and July in most areas. Some areas have been extremely dry while many areas seem to have had “just enough” moisture to date. If you are in the hot (most of us) and dry (some), the likelihood of tar spot is pretty low. But I’ll never count out a fungal disease, and scouting is always warranted.

To date, tar spot has been found in only a few counties and at relatively low levels. Four counties in Michigan, three in Indiana, three in Wisconsin, and a few each in northern Iowa and northern Illinois are the only ones reporting the disease thus far. There is an excellent source for current positive identification of the disease – check out https://corn.ipmpipe.org/tarspot-2/.

We discuss this disease now to encourage you to begin scouting for it (and other fungal diseases). Target fields that had tar spot last year, thus corn-on-corn fields. Look first at corn that is nearer to or already tasseling. Look in the lower and mid sections of the corn plants for lesions on the leaves. Tar spot lesions will be black and more or less circular, and may be found on the upper or lower surface of the leaf. Be careful not to confuse tar spot with insect frass (poop). Frass often is black and about the same size (maybe smaller) than tar spot lesions. Frass will usually wipe off a leaf with a little moisture (“spit test”) and gentle rubbing; tar spot lesions will not wipe off.

If you find or suspect tar spot, call one of us for positive identification. If disease pressure develops quickly over the next couple of weeks, fungicide application may be beneficial. We can assist you in analyzing your situation and helping you to make management decisions. 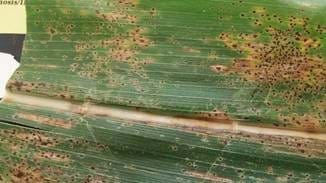