It’s been said that lessons learned by kids stick with them, not when they are taught, but when they’re caught. One way to catch a lesson is to have it shown to you by example over and over again, something that generations of Finnertys know well.

Dale Finnerty and his family, along with his father, Robert (aka Bob), operate Finnerty Beef Farm in Weidman, Mich., where day-old calves are raised to finish. The family feeds about 600 head of beef cattle, mostly Holsteins, from 1,000 acres of corn, soybeans, wheat and alfalfa.

Dale and his wife, Jane, are most proud to have raised five kids who possess a farm-inspired understanding of what it means to put in a good day’s work and live life to its fullest.

“Our dad has always said don’t put off till tomorrow what you can do today,” daughter Amy says. Each sibling has taken that mantra to heart. 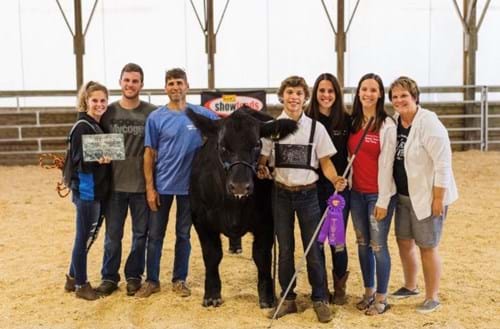 Joe is the first born followed by Amy, Ashley, Natalie, and Robert, named after his grandfather. Not all of them live on the farm today, but each contributes to its growth and stability in some way.

The farm goes back four generations. Dale’s grandfather, Patrick Finnerty, started it all in 1940. He planted sugar beets, pickles, corn and hay. Dale’s father, Bob, can still vividly recall riding on a wagon behind a team of horses when he was four years old.

Right around that time, the farm made the only new-equipment purchase it has ever made, a 1944 IH Farmall A. The transition from literal horse power to tractor power was the biggest change Bob has experienced in his eight decades of farming. He and the Farmall are still humming along today.

Bob established the farm’s seed business during the mid-1980s when he began selling Jacques Seed Company varieties. Through consolidation, Finnerty Beef Farm now sells what Dale has wanted for a long time, Dairyland Seed alfalfa. “There are always people who want it,” he says.

Alfalfa isn’t their brand only popular seed. DSR-2030E™ brand, DSR-2112E™ brand and DSR-2222E™ brand beans as well as DS-4018AMXT™ brand and HiDF-3197RA™ brand corn keep customers coming back. The Finnertys themselves grow HIDF-3802Q™ brand silage corn, among other varieties, to feed their livestock. “Big, beautiful ears on it,” says Dale. He’s expecting more than 200 bushels an acre this year.

Amy helps run their seed business in between managing the farm’s books, taking the lead on feeding the calves, and raising her one-year-old daughter, Hadley, with her husband, Justin.

Like her siblings, she’s held jobs off the farm that have made her realize the value of growing up the way she did. “One of the best compliments I’ve ever received in every job I’ve ever taken off the farm is that my employer can tell I was born and raised on a farm,” says Amy.

Perhaps it’s because daylight is finite, and some chores can’t be saved for another day. This fact of farm life taught the Finnerty kids to work smarter rather than harder. It’s something Amy believes employers recognize.

She says her dad always encouraged the kids to follow their dreams. He never made them feel as though they should stay on the farm. But she’s also quick to point out that it takes leaving the farm to appreciate the farm. 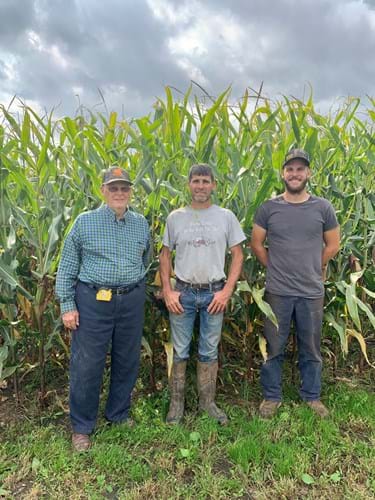 Three generations of Finnertys work together on the farm these days. Left to right: Robert (aka Bob); his son, Dale; and Dale’s son, Joseph.

Her youngest brother, Robert, discovered this for himself in his first job off the farm. He works for an oil and gas company, welding on equipment while enrolled in the welding program at Mid Michigan College. Robert admits it took leaving the farm to truly appreciate the farm. He says he’s learned to use every minute of his day as efficiently as possible, which makes Dale happy whenever their farm equipment needs welding.

Joe joined the farm full time one year ago. Before that, he was a diesel mechanic at John Deere for nine years. He says he was happy to return. “I’ve always spent weekends and nights here at the farm working anyway. Plus more time during planting and harvest.”

Dale is elated to have him back. Not only because he’s family, but also because Joe knows equipment inside and out. “And we need him to keep it going,” laughs Dale. In recent years, they ramped up their tractor technology in large part because Joe was at Deere and could provide the insight they wanted before investing in high-tech equipment.

Ashley lives with her husband in Grand Rapids, Mich. She works in the mental health field. She’s a firm believer that she wouldn’t have achieved as much as she has in her career if she hadn’t grown up on the farm.

Natalie studies animal nutrition at the University of Wyoming. When she’s away, the family calls her with questions about animal diets. When Natalie returns in summers, she pitches in on the farm.

Their mom, Jane, also works off the farm during the day. She contributes health insurance and, each night, a warm meal.

“Jane and I are both very proud of our kids,” says Dale. “They’ve all learned something important and useful in life from growing up on the farm.” 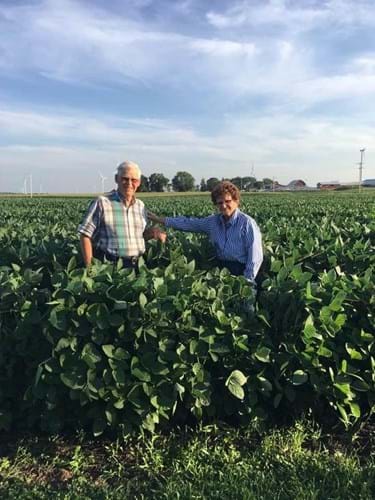 Bob and Maxine Finnerty pose in a field of Dairyland seed beans planted to feed the family’s beef herd.

His dad, Bob, would probably say the same about him. Bob and his wife, Maxine, are both in their mid-80s now. They raised eight children. They have 24 grandchildren and 14 great grandchildren. They’re both active and always together, cruising around in their golf cart or maintaining the 5-acre park they developed. Amy will host her daughter’s first birthday party at Finnerty Park this year.

Like Dale, Bob and Maxine have words to live by. Faith, family and farming – in that order. It’s a credo Amy would say was taught by her grandparents and caught by the grandkids.