Jim Coughlin and his wife, Debby, farm 6,300 acres in Iroquois, South Dakota. They mainly grow corn and soybeans, as well as some grass for their cattle, and they have been doing it successfully for more than 40 years. They also own and operate Coughlin Seed, which Debby’s dad, John, started decades ago and turned over to them in 2011. 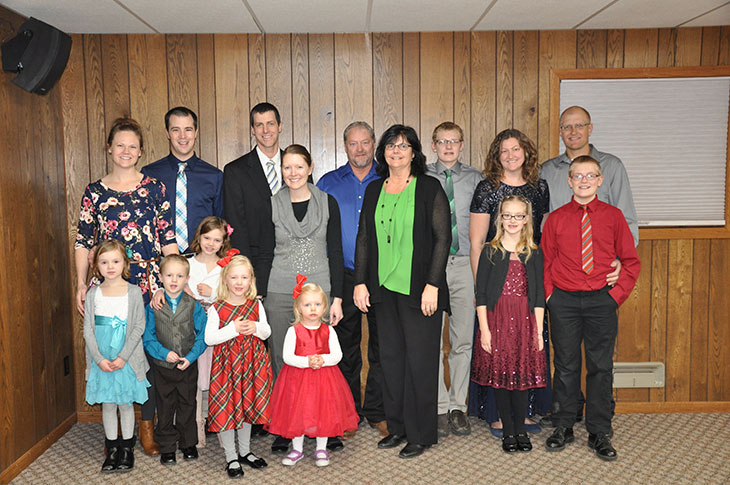 After more than 40 years of farming, Coughlin looks forward to spending more time with his family. He is pictured with his wife, Debby, in the middle and their three kids, their spouses and eight grandchildren.

Coughlin said they were long-time Mycogen Seed® dealers, but he had been selling Prairie Brand® soybeans for years. Then, as a result of the Corteva® merger in 2018, Prairie Brand became a part of the Dairyland Seed team. For Coughlin, the transition went smoothly for two reasons: he always felt Dairyland Seed had strong corn and soybean product offerings, and he has always been impressed by the company’s people and commitment to customer service.

It’s one thing to feel like a company is in your corner, but it is another thing entirely to deliver on that promise, and that is one thing about Dairyland Seed that has impressed Coughlin the most. To give an example, Coughlin first sold seed for Dairyland in 2019. During that first year, he said hardly anything got planted in his area because everything was so wet, which resulted in a higher-than-average number of product returns. However, Dairyland Seed understood the situation and trusted that next year would be a better year.

“It is a very good overall company with good people,” Coughlin said. “If there’s a problem, they will fix it.”

Coughlin’s experience falls right in line with the 5 Rules the Dairyland Seed team lives by—Do the right thing. Listen more than you talk. Tell the truth. If you screw it up, fix it. The customer comes first—and these principles shine in every facet of their business.

In addition, Coughlin said the people are “just amazing.” He said he has worked with several Dairyland Seed representatives and managers over the years, and they have always been willing to work with him to find solutions that fit his and his customers’ goals. Coughlin considers his DSM, Corey Chicoine, a personal friend, and he said he couldn’t be happier to have a DSM who is very attuned to his needs and with such a great understanding of his operation.

“Corey is a very hard worker, he stops by all the time, and he is a close friend,” Coughlin said. “He will even come up and visit us at the cabin in the summertime.” 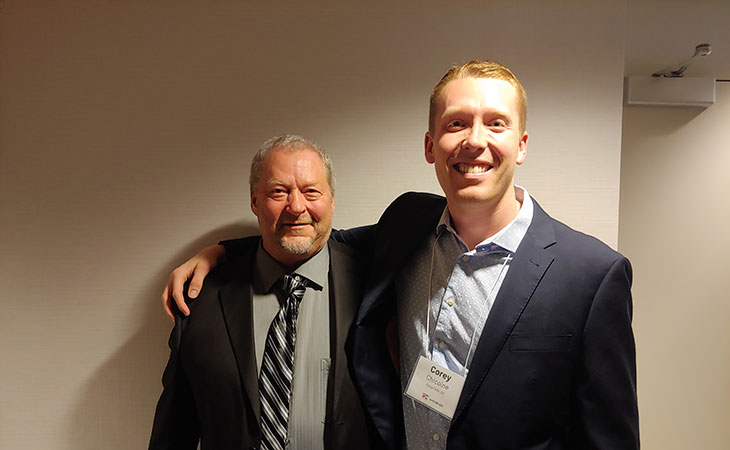 Coughlin (left) works very close with his DSM, Corey Chicoine (right), and he also considers him a personal friend.

Practice What You Preach

As a grower and a seed dealer, Coughlin wants to offer his customers the best products at the most competitive prices. One way he achieves that goal is by using his own property as a test plot to plant Dairyland Seed’s best-performing corn and soybeans from the previous year, as well as several new hybrids. This gives him first-hand experience to share and advise his customers on varieties and performance.

What has his research revealed?

For corn, he likes using the DS-4018AMXT™. Despite having a lot of rain last year and losing a lot of acres, he said this “all-around good hybrid” has good standability, great grain quality and good test weight, and they didn’t have to dry a single bushel last year. They planted this hybrid for the first time in 2018 and were blown away when they harvested 233 bushels per acre that year.

“We had a grass road between two corn fields that became known as ‘corn alley’ because the ears were just hanging out into it,” Coughlin said.

As for soybeans, he said white mold is a big concern in his geography, which is why he likes the DSR-2030E™ and DSR-1673E™ in the Enlist E3® soybean lineup. Both seeds have good white mold and herbicide tolerance, which has people in his geography excited, in addition to very good emergence and standability. Coughlin said these beans are “so easy to harvest, I haven’t had a tough bean yet.” His whole-farm average ran around 54 bushels per acre last year, but he saw some very good yields, between 70 to 80 bushels per acre.

On the forage side, Coughlin called the HybriForce-4400™ “the best alfalfa” on the market and said if a grower can put it up right, they can sell it to any dairy. He believes HybriForce-4400 is a “top-of-the-line” hybrid because of Dairyland Seed’s history and knowledge of the dairy industry.

“It’s in the name,” Coughlin said. “They’ve been in alfalfa for as long as anybody and they have the charts and data to prove it.”

Coughlin thinks they are positioned to have a good year. He plans on continuing his on-farm trials to help educate his customers about Dairyland Seed varieties, but he and Debby are starting to cut back on the farm. After more than 40 years of farming, he said the time feels right. Instead, he looks forward to offering the best products at competitive prices for his customers, doing some more fishing and spending more time with his eight grandchildren.