In the spring of 2006, Wendell Bearss climbed from the cab of his tractor and got down on one knee alongside his son Tom to scratch the soil and check planter depth, just like they had done every spring for 29 years.

“He reached out for me to help him get back up,” Tom says. Feeling the memory of that moment like it was yesterday, he pauses a while to collect himself. “So I guess I knew it was a signal.”

This is a brief story about long histories – a father and son business partnership, two historic seed companies, and simple goodness, in Fulton County, Indiana.

The Bearss family goes back a long way around here, having originally settled in nearby Miami County. It was 1834.

Patriarch Daniel Bearss began buying land. At one point, he was the second-largest landowner in the county. Having other interests outside of farming, he became a state senator and helped start the railroad in the town of Peru. In 1870, Daniel’s oldest son, George, moved to Rochester, in nearby Fulton County, and planted seeds where Tom and others still care for the land today. 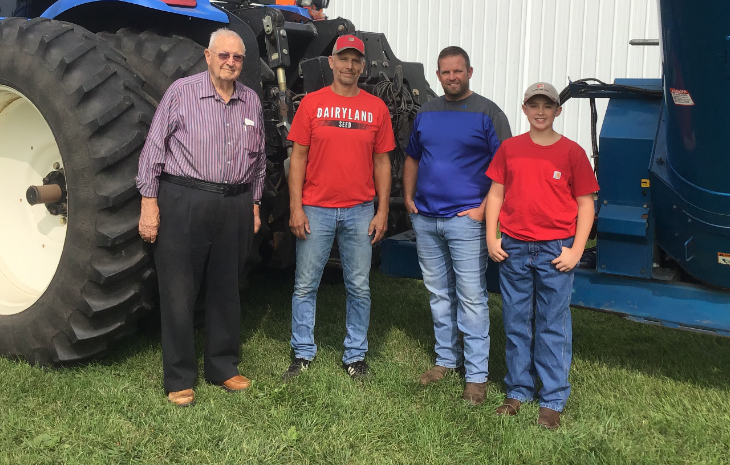 Wendell has known nothing but farming his whole life.

His first plow was a moldboard pulled by a team of three horses. At 12 years old, he followed his dad, George, around the field, both of them guiding horse-drawn riding plows, Wendell with sack of sands on his seat, placed there by George for added weight. He recalls in detail having to switch planter plates to match the various seed sizes they were planting. Small rounds, medium rounds, large rounds, and the same with flats.

He loved the land. As the decades passed, horses stepped aside for tractors. Moldboards gave way to chisel plows. The seed brand he planted remained the same. Wendell figures the farm began its loyalty to Brodbeck Seed Company when they opened their doors in 1934.

Why the lifelong love? Wendell and Tom attribute it to performance, and the people they worked with. They both can still recite the names of their Brodbeck reps from decades ago.

Oh, they considered working with other companies over the years. Wendell remembers the persistence of a particular farmer-dealer rep. “He’d bring his weigh wagon for plot tests, and Brodbeck would beat him every time,” Wendell chuckles.

It must have been a deflating experience, because eventually that rep started buying some Brodbeck seed for himself.

Tom has also known and loved farming ever since he can remember. He was driving a tractor for his dad at age 8. He’s the only one among six siblings that stayed on. His brother followed a different career path after school. None of his four sisters farms, although a couple of his siblings have ownership in the land.

That’s how it went for 30 years. Wendell and Tom and Brodbeck, inseparable.

On the spring day Tom extended his hand, he believed Wendell sensed it was time. Tom didn’t say anything. But he knew that climbing in and out of the tractor was getting to be a bit much.

Wendell didn’t say anything either. Perhaps it was too difficult for each of them to admit.

“When you farm alongside your dad for that many years, it’s tough to let go of that relationship. It’s hard right now for me to talk about it,” Tom says. “We farmed together full-time from 1976 to 2006. It was a great run.”

The two of them set a high bar. A successful father-son business partnership with little to no friction between them over the course of three decades. Except maybe for changing to the chisel plow. Tom really had to talk Wendell into that one.

After Wendell retired from full-time farming, Tom continued. He stayed loyal to Brodbeck.

Then, a few years ago, another lifelong business relationship signaled its end. Brodbeck would become part of Dairyland Seed. Tom didn’t know if he’d like it and wasn’t sure what he’d do if he didn’t.

He soon discovered that a lot of key people would remain, like his sales rep, who assured him the new marriage would result in even better products. That, he says, has turned out to be true. And Dairyland feels like a smaller company to him. The relationships are personal and genuine. Tom’s never been much for big-company culture.

“I’m impressed,” he says, about his agronomist, Rod King, who had been with Brodbeck for a long time, and his new local seed guy, David Lash, and new DSM, Mike Thompson. “Very impressed with everyone.”

It seems only the bag color changed, and that makes Tom feel like he’s embarked on another decades-long run with one seed company.

Wendell will ascend the combine stairs one last time this fall. Now 90, he occasionally visits the farm, driving there himself. “He could probably get behind the wheel and run it,” Tom says.

Maybe one day Tom’s daughters, Ellie and Anna, will return to Indiana and work on the farm. “They love the land. Maybe. Someday,” he says. Ellie’s got a good job in Utah, having just graduated with a degree in business. Anna is in South Dakota, helping to coach track and field at SDSU, completing grad school in December, and looking at coaching as a career.

Tom will have help at harvest. His nephew Adam Nicholson, and Adam’s son Brevin, have been working alongside him for a while now.

And so it continues. One seed company, and the seeds of another lifelong father and son partnership.