All dairy farms have at least a few things in common. In east central Wis., however, two neighboring dairies have a bit more in common than most.

Ever-Green View Dairy is owned and managed by Tom Kestell. Rainbow's End Dairy is owned and managed by Kestell's son and daughter-in-law, Chris and Jen Kestell. Both dairies are located in Waldo, Wis. Both dairies plant the same hybrid alfalfa to fuel and nourish their milk cows. And both dairies were recently honored for the forage quality of their hay at the 2014 World Dairy Expo in Madison, Wis.

One of the few differences between the two dairies may be a source of needling at the family dinner table. Ever-Green View Dairy won first place in the Dairy Hay division of the recent World Forage Analysis Superbowl. Rainbow's End Dairy took second place in the division.

"Dad has won this competition before and he usually places right near the top, so we're pretty content to take 2nd place behind him," said Chris Kestell. "But we'll see what happens next year. He beat us by the smallest of margins. So we might just turn the tables."

All kidding aside, the younger Kestell said producing high-quality forage is a commitment that runs deep in the family. "It's a focal point for us on both dairies. We put a lot of effort into soil sampling, fertilizing, keeping a close eye on Ph levels and harvesting at peak times. But it all starts with a high-quality seed."

On both farms, the Kestell's plant HybriForce-3400, a third-generation hybrid alfalfa seed introduced by Dairyland Seed in 2013. "We're getting really good yields and performance under a variety of growing conditions," said Kestell, who noted they are also meticulous about timing and cutting as close to peak as possible, even if that happens to be on a Saturday night and other plans have to be sacrificed.

"We couldn't be happier with the performance," said Redeker. "I've never had anything that comes close from a yield standpoint. And you can see the forage quality in the milk volume. When we're between 88 and 95 pounds per cow, I attribute most of that to the haylage. If you get good hay, the cows are going to produce a lot of milk."

Tim Clark, Dairyland Seed forage product manager, credits Redeker and the Kestells for the consistency of their approach and attention to detail. "We're thrilled the HybriForce varieties are performing so well for our customers," he said. "But all the attention to detail and focus on good management practices at each of these top three dairies plays a big part in their ability to maximize the genetic yield while optimizing quality."

In total, HybriForce varieties from Dairyland Seed dominated the 2014 World Forage Analysis Superbowl Dairy Hay Division, including the top three placings and four of the top 12. 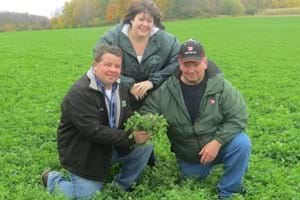 Chris (left), Jen and Tom Kestell, owners of Ever-Green View Dairy and Rainbow's End Dairy in Waldo, Wis., were recently honored for the forage quality of their hay at the 2014 World Dairy Expo in Madison. 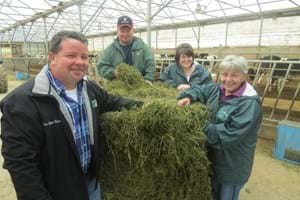 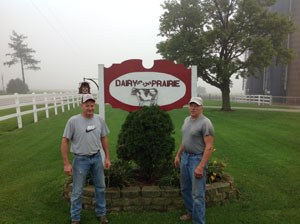 Results from the 1st, 2nd and 3rd place winners in the 2014 World Forage Analysis Superbowl Dairy Hay division. The seed that produced all three winning entries is Dairyland Seed's hybrid alfalfa. Dairyland Seed is based in West Bend, Wis.

Dairyland Seed began its seed business in 1907 and has built an established dealer network throughout the Upper Midwest, with international sales in more than 20 countries. The business experienced great success under the leadership of Orville and Marie Strachota, entering the field of plant breeding in 1977. Now part of Dow AgroSciences, the family leadership continues through their son Tom and grandson TJ. Dairyland Seed is headquartered in West Bend, Wis.