Agronomy Update: Where are we at now?

Much needed rain occurred last week in most locations. Water will be extremely vital to finishing up longer maturity soybeans and benefit most of the later planted corn. Warmer temperatures will need to continue for another 2-3 weeks.

Disease for the most part has been limited most of the growing season. However, as days get shorter and leaf wetness is more common from heavy dew, fog and rainfall septoria brown spot, bacterial leaf blight and frogeye leaf spot are becoming more prevalent on soybean foliage.

Soybean root diseases are also making an appearance in some of the more stressed areas. SDS, Rhizoctonia root rot and phytophthora root rot are the predominant root diseases.

In corn there has been a slight increase in gray leaf spot and anthracnose leaf blight.

In northeast Indiana and western Michigan, crops continue to move along slowly toward maturity. The past two weeks have been cooler than normal, raising concerns as to whether or not we will “finish” before a killing frost. This week and next week should help a lot as we expect average or above average temperatures. Corn is from full milk to mid-dent (half milk line). Soybeans are from R4 to R5 stage. Most of the territory has adequate moisture, although there are dry to very dry pockets.

Plant health is generally good on both crops. Gray leaf spot is prevalent, but the cooler weather has slowed its progression. Tar spot is showing up fairly widely in my territory, but in most cases should not affect yield. There are pockets of severe tar spot which will depress corn yields in areas within fields. Thus far, stalk rots are minimal, but it is early and we should begin watching carefully for stalk weakness. Soybean health is pretty good, with minimal white mold and sudden death syndrome. Anthracnose is seen as expected as we move toward soybean maturity. Pod feeders are active (stink bugs and bean leaf beetle), but so far I have not seen heavy infestations.

Silage harvest is underway, in some areas in mid-Michigan due to drought and early plant death. Normal maturity silage harvest is just beginning, a full two weeks later than normal. A few growers will harvest some corn and soybeans in September, but most will not have anything to harvest until early October. Stay tuned!

From the Central region we have it all. You choose the precipitation level and crop condition as well as crop disease.

In the Northwest corner of the Central region we have plenty of rain reports of up to 10” in areas. In an area that had adequate moisture to begin with. As we move south and east the situation changes to needing additional moisture to finish out an already struggling crop. The crop condition is just as variable even within a few short miles.

Timing was very crucial this year and the crops indicate as much. Diseases range from little Sclerotinia white mold in the southeast sections to significant levels in Wisconsin. Where corn was severely stressed, stalk integrity is lost and harvest scheduling will be key.

Some high intensity storms made their way through much of the Western Region last week, with many areas receiving 3-10” inches of rain. We did have some high winds and also a tornado in the Sioux Falls South Dakota area mid-week. 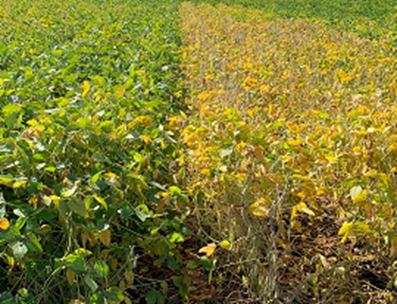 We do have soybeans that have dropped a majority of their leaves and if the weather cooperates we could have some early planted early maturing soybeans being harvested in 10-14 days, whereas some of the later maturing soybeans will need more time and beneficial weather before they are harvested. Sclerotinia White Mold (SWM) as well as Brown Stem Rot (BSR) and Sudden Death Syndrome (SDS) are present in many fields. Earlier season diseases such as Bacterial Leaf Blight and Septoria Brown Spot are pushing leaf drop and crop maturity along faster in many areas.

With the cooler weather we have had this growing season silage harvest is 2-3 weeks later than normal. We anticipate some silage to be harvested in the next 10-14 days with the majority of silage to be harvested in 20-35 days. Crown and stalk rots are starting to become more apparent which will intensify the need for proper harvest order to ensure we capture higher yields. Corn like many other crops will need sunny days and warmer temperatures to help push crop maturity along.

With silage harvest looming, the state of Wisconsin was hit with 2-5” of rain last week (some reports of 10” in southwest Wisconsin). The crop is passing through the low 70% moisture ranges in the southern part of the state, so the rain hasn’t delayed harvest too much at this point, but farmers will be ready when fields dry up. Harvest to the north and west is on a similar time schedule in some places, maybe 2-3 weeks out in other places. Eastern and north central Wisconsin might be 3-5 weeks away from silage with their extremely late planting. Many farmers in these areas are looking to friends and neighbors to help fill bunkers, bags and silos. Silage harvest will be a good gauge for our ability to finish grain.

Soybeans are beginning to turn across the state and should be able to finish nicely in most geographies. White mold is popping up and seems to be an all or nothing deal this year. The Eau Claire region, southeast Wisconsin and portions of southwest Wisconsin are being hit the hardest. Cocktails of other diseases such as brown stem rot, sudden death and Septoria are also setting in, sometimes accelerating maturity, sometimes not.