Scouting newly emerged soybeans may reveal some stem, leaf and cotyledon feeding damage.  Last winter was on the milder side.  Mild winters provide a good environment for survival of adult Bean Leaf Beetles (BLB) which overwinter in fence rows and areas of heavy residue or woodlots.  Unfortunately, the first soybeans emerged in the neighborhood may get heavy feeding from BLB.  BLB seems to have a radar for soybeans.  As more soybeans emerge populations dilute and spreads out the population.

Soybeans can tolerate up to 50 percent feeding damage in the early vegetative stage, however, monitor for severe cotyledon damage and cotyledonary node feeding  damage.  If feeding damage is occurring on the cotyledonary nodes, treatment may be needed.  BLB will remain throughout most of the growing season since they may have up to three generations.  Reproductive stage soybeans may continue to be fed on by later generations of BLB including pod feeding.

BLB is a vector for transmitting several soybean viruses -- Pod Mottle Virus is one of the most common.  Pod Mottle Virus may cause “Green Stem” in soybeans and may delay harvest and produce poor quality seed.  Pod feeding is also a concern, as the pod loses its protective water proof coating and allows for water and pathogens to spoil the seed.

Some of the consequences of planting in “less than ideal conditions” is that in most instances you fight getting nutrients into the plant all growing season. The photo below shows two corn plants, planted on the same day in the same field, same hybrid and same growth stage, (V4) but vastly different root systems. The plant on the left has a root system that is more robust and will be able to grow towards and intercept more available nutrients than the plant on the right. 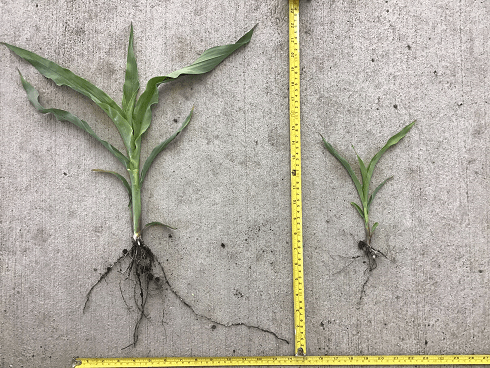 Nutrient Management is not easy in “normal” years, when you add in compromised root systems, it makes it that much harder. Mobile nutrients such as Nitrogen(N) and Sulfur(S) have moved through the soil (or up into the atmosphere) due to the amount of water on or going through them. This has been verified on the Nitrogen side with reports that Nitrates levels are coming in less this year than compared to other years. This is more prevalent in areas with higher rainfall amounts or where water ponding has taken place, either last fall or this spring. If you are applying additional N on, via Sidedress, Topdress or Irrigation, including Sulfur with your N, increases your N efficiency and, in most instances, your yield. This may help with drydown in the fall as well as potentially increasing test weight.

Many active discussions have taken place on what is the correct rate of N to have for your corn and my reply is “it depends”. Factors such as soil Cation Exchange Capacity (CEC), Organic Matter (OM), soil type, historical manure applications as well as Potassium(K) levels, have a profound impact on how much nitrogen is available and what the plant can use. The rule of thumb that I have used is: Yield Goal * 1 to 1.25 units of N – legume or manure credits = your N rate. Historically this is about .8 to .9 units of N per bushel of corn produced. In areas with historical manure application and or intense nutrient and crop management, N use per bushel of corn can be reduced further. In these instances it is not unusual to get Nitrogen use rates per bushel down to .55 to .6 units of N per bushel.

The importance of in-season N applications is increased due to plant breeding efforts and trait insertions that have allowed the plant to utilize Nitrogen later in the plant’s life cycle. This has increased yield potential as well as decreased N per bushel used.

If you have low soil tests values for Phosphorus (P) Zinc (Z) or K, there have been many instances where in-season applications of these products to an actively growing crop have resulted in yield increases and have a positive Return on Investment (ROI).

*If you are applying additional Nitrogen on lighter soil types the addition of a nitrogen stabilizer such as N-Serve for anhydrous ammonia and Instinct products for urea and UAN products for below ground N applications will help keep your Nitrogen in the rooting zone.

Lastly, if you have questions about this or other Agronomic topics, please feel free to contact one of your Dairyland Seed Agronomists.

Slugs can literally, and figuratively, slide under our radar this time of year! We aren’t seeing widespread issues, but the Dairyland Seed Agronomy Team has noted some hot spots with this spring’s cool wet conditions. Slugs like no-till, heavy residue (especially sod) and thrive in colder, wetter environments that lack sunshine.

On sunny days you will need to dig under residue and into the soil to find slugs and their eggs, but the evidence from overnight feeding will be present. The worst-case scenario can occur at early crop growth stages, when plants can be completely cut off, resulting in stand loss. In corn, striated leaf chewing follows the leaf veins and is a somewhat tolerable nuisance. Corn will grow out of minor leaf feeding with little effect on yield, but can suffer if roots are attacked. Early on, soybean cotyledons and hypocotyls will show evidence of chewing or may be completely consumed. Leaf damage will appear more mottled than in corn, again staying between the leaf veins.

Scout no-till, heavy residue, cover cropped fields more often to monitor damage, but management is difficult after infestation. Proactive control of residue and weeds in fields with a history of slugs is the surest control. Slugs are mollusks, not insects, so insecticides and Bt proteins do not control their populations. With a lack of effective control methods, economic thresholds have not been established. There are “molluscicides” out in the marketplace, but effectiveness varies. Some have tried to apply heavy rates of potash in an effort to “salt them out”, also with limited success. Sunshine and hot weather will cut infestations short.