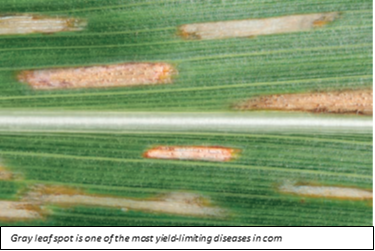 Overview: Gray leaf spot, caused by the fungus Cercospora zeae-maydis, leads to leaf tissue loss, a decrease in plant sugars and decreased grain production. It is considered the world’s most yield-limiting disease in corn, causing yield losses from 5-40%. All corn hybrids have some susceptibility to the disease.

What you should know: 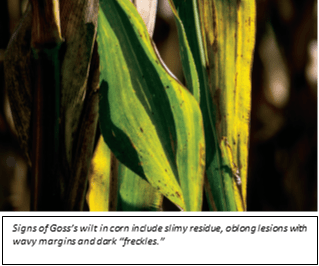 What you should know: 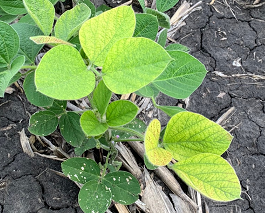 IDC symptoms are interveinal chlorosis of the leaves with leaf veins remaining green as shown in the photo below. These yellow leaves tend to show up when the soybean plant is in the first to third trifoliate stage. IDC is more prevalent in poorly drained soils containing high pH or calcium carbonate, high salt or saline soils.

Soils in most instances have enough iron (Fe) for production, the issue that arises is that as pH increases the soluble form of Fe decreases due to high pH especially those with high calcium carbonates and in some instance’s salts. As air space reduces in soils (wet soils) the respiration of carbon dioxide from roots and soils increases, when that happens you increase bicarbonate levels at the same time. Higher bicarbonate levels (I always think higher soil pH in this instance) correlates with higher IDC.

Other factors that may increase bicarbonate levels are crop residues and manures. As soil microbes are breaking down organic matter from the crop residue or manure, they release carbon dioxide which again raises bicarbonate levels. Higher soil nitrate levels and increased IDC, in my opinion, is very complex, as a soybean root takes in nitrate it exchanges it with bicarbonate ion, again increasing bicarbonate soil levels. Another aspect is as the plant brings in nitrate it converts it to ammonium in the leaves which increase leaf sap pH levels and then reduces the level of usable Fe available to the leaf and plant.

Other factors that may reduce IDC severity:

As always, if you have questions about this or other agronomic issues, please contact your local Dairyland Seed Agronomist.