Soybeans are starting to be combined and yields in some areas are better than anticipated, while others are not. The questions about how soybean plants put on yield are sometimes better answered with “I don’t know” or “it depends” as an answer. In the “World according to Brian Weller”, with everything being equal, soybean yields are driven by these factors:

Nodes per plant is largely determined by V5 (Fifth Trifoliate), and it is widely believed that by planting earlier we tend to get more nodes per plant. Another aspect of this is that at each node we can have branching from the Axillary Buds. Branching can be a function of a soybean’s genetic background but also plant population; fewer plants = more branching. Node development will continue until the soybean plant reaches the R5.5 growth stage. Nodes are where flowers are produced and flowers are potential pods.

Pods per node is largely a factor of the number of flowers that each node has -- the more flowers, the more potential pods. Soybeans can abort 60 to 80 percent of their flowers. This is due mainly to climatic conditions, but can also be pest or fertility related. The average node on a soybean plant will produce 1.5 to 2.5 pods per node with some being more and some less. Most nodes in the center of the plant will have more pods per node, while the top and the bottom of the plant will have fewer pods per node. Having one extra pod per plant can increase yields 1-2 bushels/acre.

Seeds per pod on average are 2.5 seeds per pod. The behind-the-scenes information that people don’t talk about, are that in order to fill those pods with more seeds, you need to have enough sunlight so the leaves at that node can photosynthesis efficiently and fill pods. A large part of the energy that is produced at that node is directed to the pods and the seeds at that node.  As many cloudy days as we have had, as well as the defoliating insects (Green Cloverworms, Japanese Beetle, Thistle Caterpillars, Grasshoppers) that were attacking leaves, and in addition to the defoliating leaf diseases such as Septoria Leaf Spot, it is a wonder that soybeans are yielding as well as they are.

Seed size or weight of the seeds can have a big impact on yields. The bigger and heavier seeds are, the fewer seeds are needed to create a bushel of soybeans. Seed size is generally thought to be genetically limited, however, good growing conditions with enough sunlight and water after R5.5 is a factor that can make seeds bigger.

Proper plant nutrition plays a big role in creating pods and seed. The wetter conditions early in the growing season allowed soybean plants’ roots to not have to grow as deep to access water and nutrients. Compaction also played a factor in shallower root development. Plant fertility, or the lack thereof, is an aspect that many farmers and agronomists sometimes forget about when thinking about soybean yields, or that soybean yields are all about the variety and placement, which largely they are, but is not always the case. Remember, a 60 bushel soybean crop will remove 50 lbs. (P2O5) of Phosphorus and 78 lbs. (K2O) of Potassium from the soil. If you fertilize for corn and not soybeans, or if you fertilize for corn and soybeans, and your corn crop yielded more than your yield goal, odds are you were short on fertility. If you have soil pH levels that are below 6.2 or above 7.2 you have additional fertility concerns that will affect soybean yields.

Lastly, if you have questions about your soybean yields, talk to your local Dairyland Seed personnel to help discuss yield limiting factors, and what Dairyland Seed soybeans will work best for you and your farms.

In many geographies we are noticing what could be called early decline in the corn crop.  There are several symptoms, including premature ear droop, early leaf death, and premature whole plant death.

All of these symptoms are the result of some untimely or severe stress on the plant.  The biggest single factor this year is drought stress.  While many places have had too much rain the past week or two, many areas did experience drier than normal August and early September weather.

Premature ear droop:  We’re not talking about ear drop – where the ear breaks off at the shank and falls to the ground.  Rather, we are talking about the shank bending and the ear tipping downward prematurely.  This has happened as early as half milk line on the kernel, or about halfway through the dent growth stage, and likely two weeks or more before normal black layer.  The biggest cause seems to be drought in August and early September.  It has happened most significantly on plants with big ears – think gravity.  The shank becomes weakened due to drought and the whole ear tips downward.  In all cases this will result in decreased flow of photosynthates to the kernels.  In severe cases, this has cut off all or nearly all the flow of materials to the kernels.  The result will be slowed (or stopped) progression toward black layer.  Light kernels, lower test weight, and some yield decrease can be expected.  You may see differences in hybrid responses.

Premature plant death (PMD):  This is often observed on individual plants in a general area.  In severe cases, whole populations in an area die prematurely.  Again, drought is the biggest culprit.  However, plant disease (often anthracnose) can also cause this.  This year we’ve seen it as early as 50 percent milkline or perhaps even earlier.  The result will be lightweight kernels, likely lower test weights, potential loss of stalk integrity, and decreased yield.  You may know from soil type and weather whether it is drought-induced.  It is sometimes instructive to split stalks – make sure to go all the way down into the base of the plant – to examine nodes for the evidence of disease.  If disease is part of the issue, you will see discolored (gray or blackish) nodes, often starting at the bottom of the plant and possibly progressing up the plant to subsequent nodes.

Soybean yield loss due at harvest can be a result of 1) delayed harvest issues such as shattering, lodging, etc. and 2) mechanical losses from the combine. With a 12”x12” square you can categorize how much yield you are leaving in the field. Michigan State University recommends that we target 3% or less yield loss from mechanical harvest. If we consider that 4 beans laying on the ground per square foot is equal to roughly 1 bu/Ac yield loss, we want to see less than 6 beans per square foot in a 50 bu/Ac field (Figure 1). Generally, mechanical yield loss is the number of beans on the ground after the harvester minus the number of beans already on the ground before the harvester, but here is how you can drill in deeper:

1.  Stop the combine in the middle of a pass and back out after the machine has cleared out.

2.  Toss your square on the ground in the following areas and count the beans inside it. Do this at least 3 times in each area to get an average.

a.  Ahead of the combine in unharvested crop: The number of beans on the ground is the shatter loss. Include beans that were in dropped pods. If beans are shattering or lodging ahead of your combine pass, it’s a harvest timing issue in most cases.

b.  Under the machine to capture header losses

i.  Stubble count: the number of beans in pods still attached to the cut stubble. They were too low to the ground for the header to cut and pick up.

ii.  Escaped plant count: the number of beans on plants that were cut but not gathered by the head. Are stems too wet? Are reel settings tuned?

iii.  Lodged count: the number of beans on plants that were not cut by the header.

c.  Behind the machine loose bean count: now the total of environmental shatter, header shatter and threshing loss.  Avoid the chaff pile from when you stopped.

a.  Note that remedies for individual issues are listed above. 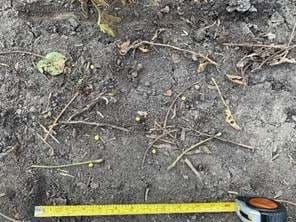