With the delayed plantings across much of the Dairyland Seed marketing area, many crop producers are inquisitive about crop progress and its race to the finish line.

Soybean growth and maturity is dictated somewhat by hours of darkness.  As the nights get longer or days get shorter, soybeans initiate the reproductive (R) stages of development.  Most fields and/or plots are well into the reproductive stages at this time and specifically R4 or R5.  There are fields further along, of course, and others not as far.

With those stages laid out, our soybeans in the more northern areas, with average killing frost dates in very late September early October, need to be solidly in the R5 reproductive stages.  In our more southern areas with frost dates near mid-October, soybeans should be in the R4 are needed for timely maturity.

Based upon feedback from many who were able to attend one of the multiple Enlist™ Technology Center training sessions over the last several weeks across the Dairyland footprint, one of the more valuable learnings demonstrated differentiating between soybean injury symptoms from dicamba and the 2,4-D family of chemistry.   The latter of which includes the Enlist One and Enlist Duo products. The table and photos below provide a summary of what we learned and observed at these valuable Enlist training opportunities.

Appendix 1 below is a sequence of photos demonstrating what dicamba and 2,4-D injury symptoms look like down the row at different levels of sprayer tank contamination 2 weeks after application. The experiment demonstrates soybean’s naturally higher tolerance to 2,4-D compared to dicamba. 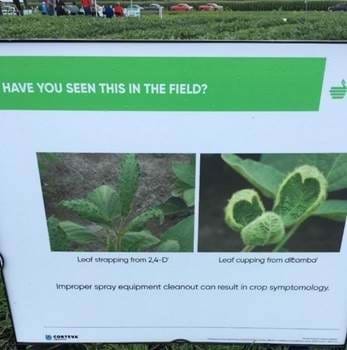 Race to the Finish Line: Corn

Every year we wonder if the crop “will make it”, by which we mean:  Will the crop get mature and harvest-ready before the first killing frost?  This year that question looms larger than normal due to the lateness of planting.  Since much of the crop was planted in June – a full month or more later than “normal” – it is a pertinent question.

We can’t predict the weather, of course.  We can’t know when the first killing frost will actually occur.  But we can look at crop progression and make some “best guesses” based on normal crop growth and normal killing frost dates.

Blister:  After the ovum is fertilized by a grain of pollen, the kernel begins to form.  Silks detach from the kernel and the still white kernel begins to grow.  The embryo contains the radical root, coleoptile, and the first embryonic leaves.  10-14 days after silking.

Milk: The kernels now go from the white blister to yellow “plump” stage.  They are “milky”, or full of thick liquid. 18-22 days after silking.

Dough:  The kernels continue to grow and now reach their maximum size.  The milky fluid now becomes solidified, or doughy.  24-28 days after silking.

Dent:  Kernels have reached their maximum physical size and begin to shrink, with the formation of the dent on the end of the kernel.  Starch is still accumulating in the kernel.  In fact, at the beginning of “dent”, only about 45-50 percent of the final starch has accumulated in the kernel.   35-42 days after silking.

Black layer, aka physiological maturity:   A “black layer” membrane forms across the tip of the kernel.  This indicates physiological maturity.  The kernel has now accumulated its maximum starch content.  It is now complete and is a viable seed.  Kernel moisture is now between 30 and 35 percent.  A killing frost at black layer will not result in any yield decrease – the maximum has been reached and “locked in”. 55-65 days after silking.

As you can see, each growth stage happens over a range of days.  This is largely a reflection of heat units, or growing degree days, and partially a reflection of the genetics of the given hybrid.  The average might be some 55-65 days from silking to black layer, but it can vary a lot depending on ambient temperature, and, to a lesser degree, moisture available to the plant.

So, will the corn crop finish?

You can estimate for your crop:  You need 55-65 days between silking and the first killing frost for full black layer maturity.  Obviously, if your silking onset date was quite late and/or we have an early killing frost, corn may not completely mature.  For most of our growing region, it seems likely that, given a normal killing frost, we should see the crop mature or very nearly so.  Slightly warmer than normal temperatures through September would certainly be welcome this year.